Stay up to date with the latest news from Consort 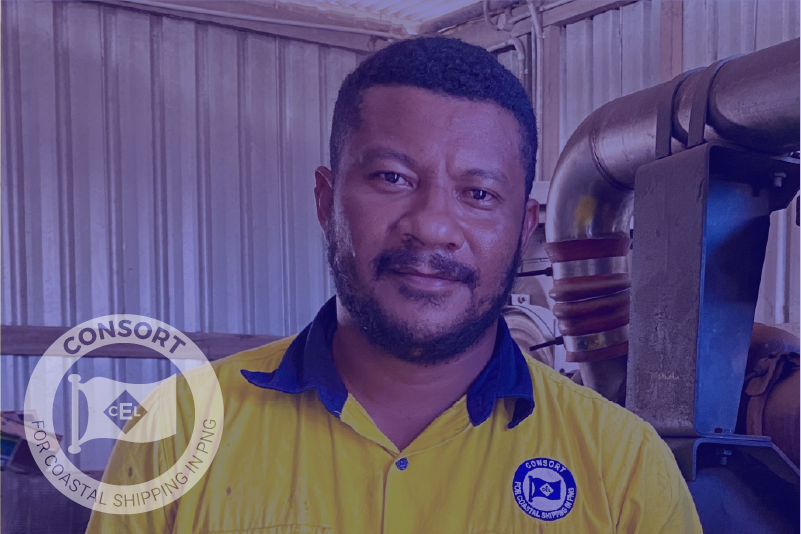 In May this year, Gideon Momia will clock in 13 years as a Marine Engineer with one of Papua New Guinea’s most renowned shipping companies.

For the 34-year-old from Milne Bay and the Autonomous Region of Bougainville, joining Consort Express Lines was a choice he made as a cadet and never looked back. He is privileged to have been sponsored by Consort from the very beginning of his engineering career, achieving his Class Four certification up to his current qualification as a Class One Engineer.

“Since most of my friends and course mates were Consort sponsored cadets, I had my eye on a job at Consort”

Before becoming a Chief Engineer, Momia served as a Second Engineer overseeing the safe day-to-day running of all engine room machines, both in port and out at sea, and allocating specific jobs to Junior Officers and Cadets. Part of his job as per the company Safety Management System (SMS) was to also train Junior Officers.

“We all will remain forever grateful to Consort,” says Momia.

Three highlights of his career were, firstly, as a Cadet in 2009 where he was part of an engine room team to sail from Port Moresby to Cairns, Australia bringing a ship to slipway, staying there for five months, and sailing to Port Moresby via Townsville when slipway was complete. Secondly, in 2014, where he was part of a 14-man crew to fly across to Singapore and sail the Gazelle Coast under the command of Captain Sod Baim. Momia served as a Third Engineer and it took them two weeks at sea to sail from Singapore - transiting the Torres Straits, Australia and through to Port Moresby. Lastly was obtaining his Engineer Class One Certificate of Competency (CoC) at the end of 2020.

Momia says the most interesting part of his job is tackling a breakdown in a vessel’s engine room, whether it be in port or out at sea. All engineers attempt to trouble shoot and find the root cause of the problem. While another challenge is difficulty sourcing marine engine spare parts in country, where the company then needs to order from overseas and with that time is a factor.

“The thing that motivates me and keeps me going, is the fact that everyone must work to earn an honest living to feed their family, it is satisfying to see your children eat food that is earned through honest, hard work and I’m also simply grateful to have a job in these tough times. As we all know jobs are really hard to find these days.”

“My message to young people who want to be like me, would be to always remember to never take anything for granted, especially the opportunities that come your way.”

“Strive for excellence in your studies, be humble, kind and once you land your first job try remain loyal for as long as you can, learn to respect work mates regardless of their job titles and try to never complain when you are doing your job, these simple traits will get you a long way in your career.”

“Never ever forget the people who helped you achieve your goals along the way. And the most important thing above all, is to never forget God in your daily life for He is the very focal point of success.”

Momia puts his success to the endless support and prayers from his family, whom without, would not be where he is today.

“My heart remains forever grateful to you all as long as I live,” Momia expressed.